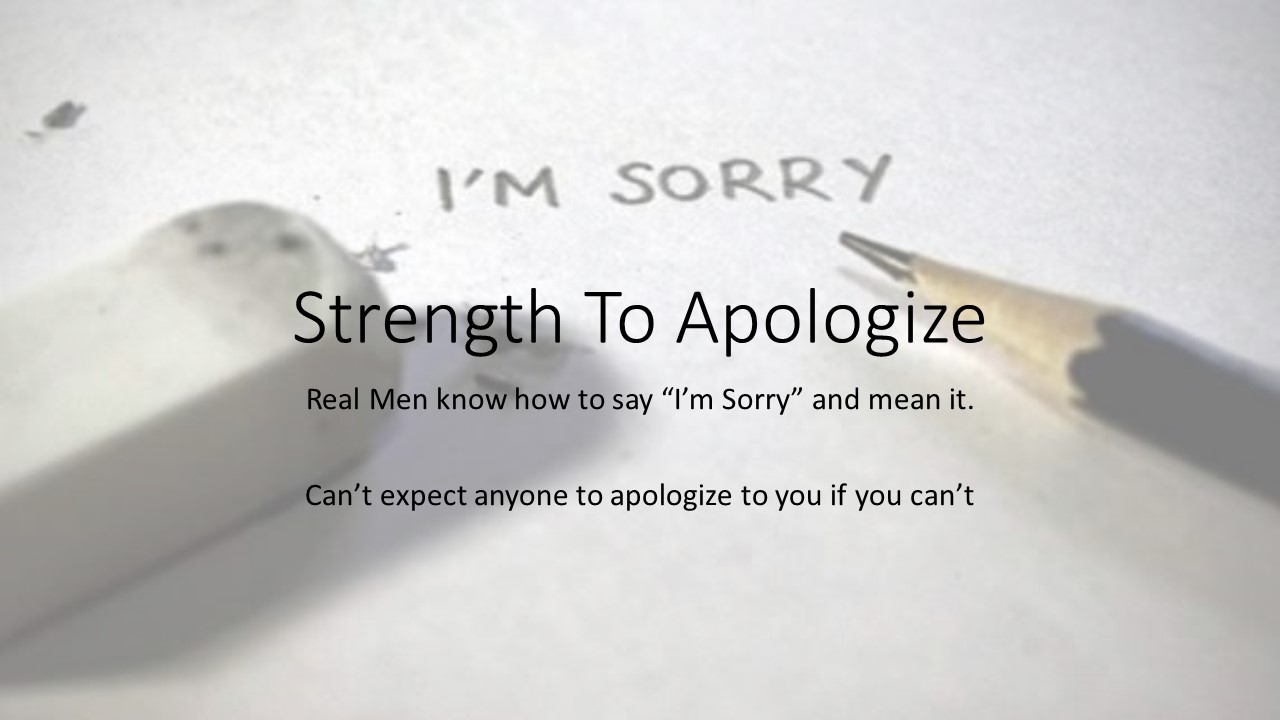 Today, sharing something a little different on the blog. A thought worth exploring. The power of the phrase “I’m Sorry” is often ridiculed and treaded under foot.

Sadly, many feel that it’s a sign of weakness to apologize for doing wrong. It’s a bit of hubris and arrogance to assume that you’re perfectly OK for doing something wrong. Sure, not all cultures put a premium on saying “I’m sorry” but all current forms of civilizations have the concept of “I’m sorry” built into them.

Over time, they also learn how to avoid admitting they’re wrong because of various cues and consequences they want to avoid. In adulthood, people will hide their wrong doings for any number of reasons. It is easier to blend in and pass as the “good guy” than to admit one is wrong.

The problem with admitting one’s wrong doing is that there is a public “record” of that wrong doing being admitted. There is an accountability factor. There is a bit of (unfortunate) shame around it. Others sometimes will not let it go. With social media being a permanent record in most places, admitting you’re wrong becomes part of your brand in an era where showing flawlessness is very important.

To go against all this polished perfectionism requires great strength. It requires humility and the ability to keep the ego in check.

When it comes to respect

Sadly, most guys would rather feed the ego than grow their strength. It’s a short term fix. To build up fortitude of character to be able to admit being wrong takes time and the gains are reaped in the future.

Being the tough guy or the stoic guy or the flawless appearing guy is not true strength. Real strength is filled with courage. In principle, doing what is right even when it doesn’t feel like it’s right. That’s courage. That’s the fuel for true strength.

Women respect that. Immature women may not. Being strong enough to be vulnerable is appealing. It means you’re real. It adds to the sense of security a woman needs to have with her man. Knowing her man can admit he’s wrong and then take steps to make things right adds confidence, security, and trust.

More importantly, when a man models how to say “I’m sorry” he sets the tone for how the rest of his household should handle their mistakes. Never admitting you’re wrong will eventually sour your wife/girlfriend and they will learn not to apologize often, if at all, with you. Same goes for the children.

Not apologizing teaches it’s perfectly fine to ignore other’s hurt feelings and the value is in the perception of being flawless.

When admitting wrong, the process is just getting started. A dialogue is now open. Feelings can be shared. One acknowledges not just the wrong, but the harm done by the wrong.

As one person once said… “an apology is more than just about the wrong. It’s about releasing the individuals from the hurt caused by the wrong”. Another added… “it’s giving both parties permission to close the hurt, release the hurt, and move forward”.

When a man says “I’m sorry” after making a mistake, he’s creating the space for healing that is necessary. He’s creating the chance for forgiveness to take place. The wrong is no longer a stumbling block for the relationship. Everyone is clear and open about what took place and can then make their own decisions about how to move forward.

Saying “I’m sorry” is about helping two or more people grow. That takes a lot of strength. Especially when the wrong-doer has to take into account the needs of the wronged and make things right by them. That is big time strength. When done right, both parties come out better and stronger from the process

For this relationship Monday post, do look to add more vulnerability with the people you’re closest to. When it becomes clear that something was done wrong, be ready to admit it and apologize. Shorten the length of time that could have been spent in disputing the validity of being wrong, and just apologize.

Quick note, some have been socialized to be overly apologetic. Don’t fault them for this. Help them grow by showing them when and how to apologize effectively.

If someone points out that they were wronged, even if you’re not aware that what was done was wrong, own it. Treat it as a chance to learn their preferences better.

By showing your close loved ones that you care about their feelings, they will learn to care about yours as well and apologize whenever they’ve done you wrong.

It’s a play on the golden rule… do unto others as you want done to you. It begins with you. Set the tone, set the stage, set the example. Leave the “Do unto others as they’ve done to you” for the amateurs and less mature. Lead by example and be the person who initiates healing and growth by admitting their wrong doings and saying “I’m sorry”. It is game changing.

p.s. learned this lesson when I apologized to my toddler for something I did that I thought was correct, but was not. The way his eyes opened up with surprise… then… smiled… followed by a big hug… with a whispered “thank you” was epic. My toddler now apologizes on his own whenever he’s done something wrong. I never had to teach him this. I modeled it