Sometimes, we push so hard to have better, we forget others are not the same type A personality we are. While that is fine within friendships, it can be a sticky point for some relationship. Whenever ambitions compete… more like don’t compete… certain tensions tend to build and test the resolve of love.

Most people have one of two major ways to approach life. They either go with the flow or they create their own waves. It’s the difference being a driven Type-A and not being one. This overly simplified view of the world will have to work for this blog post, as the many nuances are too complex for a good story… or is it… 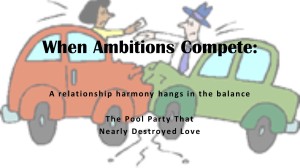 Terrence was one of those guys everyone enjoyed hanging-out with. Funny, well mannered, pleasant, socially comfortable, he brought energy to the room with an abundance of smiles. Getting good grades in school was not his thing. Creating experiences others enjoyed was his specialty.

With much encouragement from his surroundings, Terrence found himself a college graduate working a decent job and comfortable where he was. Going up the company ladder didn’t interest him. Getting a larger place to live and a larger car didn’t matter to him at all. Those things were for others.

Where Terrence excelled, the keeping of friends connected. Always a thoughtful call, text, or email. If anyone knew what was going on, it was Terrence.

Alex was a different story. She was wound up tight. Prone to nervous worries, Alex had her life mapped out on a calendar with exacting metrics to keep. Consummate overachiever, Alex got top grades, knew all the course work in school, networked with all the professors, knew all the top performers in all the classes she took. A walking Google, people felt that Alex knew a bit too much about her area of expertise.

The opinion of others didn’t matter too much for Alex. She knew that one day, when she had her career solidly built, life would be as she designed and enjoyed for being as it was.

By themselves, Terrence and Alex did very well. Together, things got a bit tense. They could not see eye to eye on where their relationship should go. Conversations often spun around what was enough and who should relax. In fact, let’s just drop in on one of their arguments in progress.

Why can’t you just accept my view

“Babe, when are we going to sit and plan out our soire?” Alex asked.

It had been a few weeks since they had agreed to have a pool party with friends. The summer was getting hot and the pool was finally warm.

“Plan? Our friends know they can come over whenever. We got everything already” Terrence replied casually.

“Uh…so… when are they coming over?” Alex insisted

“Whenever.. Why must everything be planned?” Terrence shot back.

The room temperature had shifted. Most arguments started over something simple and silly. Worse, this early in the relationship, such sparks were worrisome to Alex.

“Ok. I’ll put something together for two weeks from now. I’ll send you a calendar invite” Alex announced.

His smile fading, Terrance looked up from his phone.

“A calendar invite? Why so formal? What kind of pool party do you think we’re having?” Terrence asked.

“You said you wanted a soire. That takes planning. We don’t have everything. I’ve got a busy schedule” Alex started.

With a wave of his hand, Terrance cut off his girlfriend. Hanging out with her was fun, but this was sucking the air out of the room.

“Look, we’re not planning a house warming. We’re not receiving high society folks. It’s just a few guys I know and a few gals you know splashing water in a pool. Don’t need to plan this” Terrence stressed with an elevated voice.

With a bit of shake in her voice, as her adrenaline was tapping her nervousness, Alex stood up to square off with Terrance.

“Babe, honey. Sweetheart.” Alex now had her hands clasped together imploring her man be reasonable. “Do you not want me to be there at this pool party of yours?”

Terrence was now feeling disrespected. His lady had to be there at his pool party. This was not going to work if he and his boys sat around the pool quietly. They needed the women of the group present.

“You’re forever trying to plan every inch of my life. From what I will be when I grow up to what I will wear to my own pool party! Chill OK. Just. Chill” Terrence threw his hands up in the air to show his frustration.

“Good luck with that pool party of yours” Alex finished as she grabbed her backpack to leave and head to her place.

Some time later… after a canceled pool party

The two sat quietly. The meal was boring. The garden variety freezer hungry man dinner microwave plates. Terrence knew that Alex was fuming quietly. He had forgotten that she was coming over. Considering they had not spoken much, Terrence assumed that Alex was still angry about his reaction to the cancellation of the pool party. Now, she was quietly eating her least favorite meal while avoiding eye contact.

“Listen. It’s not like we can’t plan a big thing. Why can’t you just chill?” Terrence asked quietly.

“Just. Chill?” the bitterness slid off of Alex’s tongue a bit too easily.

“Yeah. You got your life planned out. If you don’t have chill written in the calendar, you don’t relax. It’s summer for crying out loud” Terrence spoke absentmindedly as he looked out over his patio to his empty pool.

“So… you’re saying that you can cruise to an amazing life without planning?” Alex tested.

“What about marriage? Children? Schooling? Honeymooning? Retirement? How do those things happen?” Alex wondered.

“Things will happen when they need to happen. You don’t have to force life. Life just happens” Terrence exhaled.

Now, Alex felt annoyed. Sitting up a bit straighter, she prepared to unleash on Terrance and see where his values were. If she didn’t get straight answers, she’d have to reconsider where her life was going to with a man who didn’t have any ambitions.