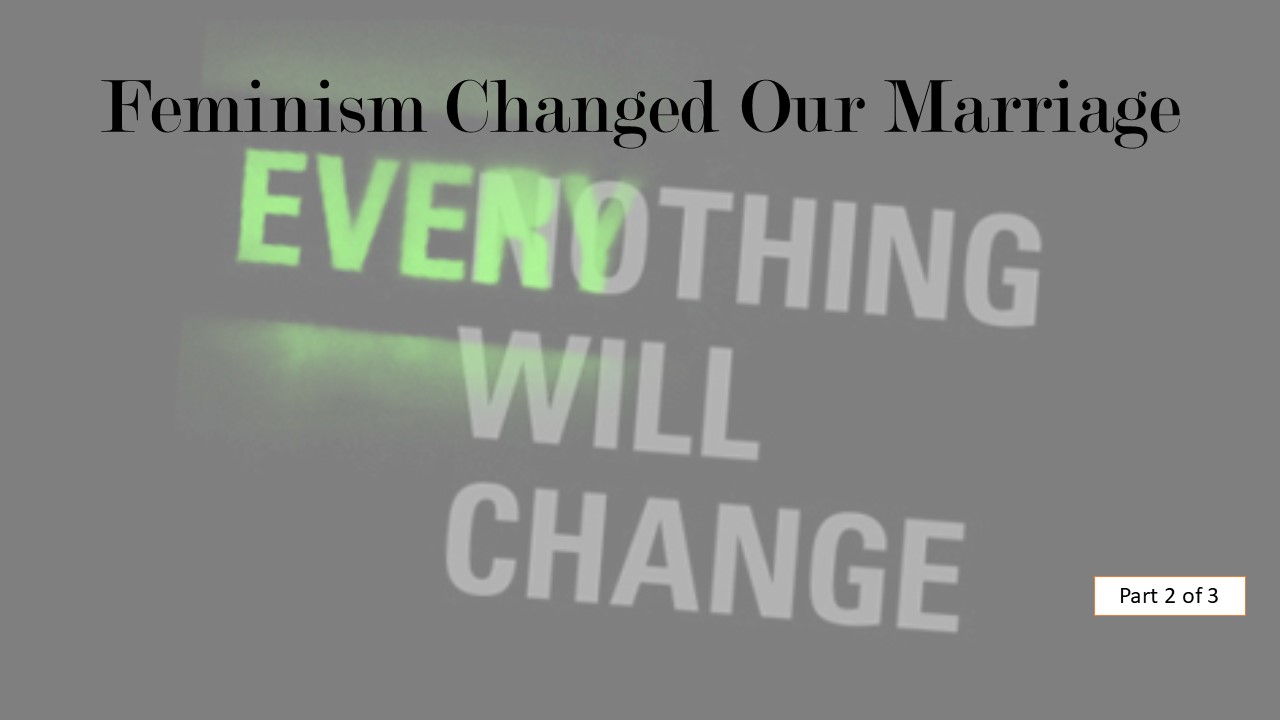 This is the second part of three… depicting a fictional story. Dorothy and Albert deal with a set of changes in their marriage. Could these changes improve or make things worse? Let’s find out. Yesterday, we started off with her side of the story. Today, we’ll touch his. Tomorrow, we’ll wrap up with the counselor’s side of the story. Enjoy.

Albert was a level headed reasonable guy. Or so he thought. Having enjoyed a bit of popularity in school, Albert thought he understood how to get along with people. The transition into marriage was a blast for him. He had found the perfect woman who made his world glow with optimism.

There was not much he would not do to make his lady happy. He encouraged her to be the best she could be. He pushed her to advance her education and dreams. He networked with her to help her connect with influential people that could help her fulfill her dreams.

Life was pretty good in the early days. There was a bit of cultural adjustments that went pretty well. In his mind, Albert was a hard working smart man who took great pride in providing for his wife. It was his primary objective. Make his lady happy and take care of her needs.

In time, he realized that providing was not enough. Protecting was not going to impress. Albert had a strong woman on his arms. He loved that about her. She took care of herself well. However, it soon dawned on him that she didn’t need him at all.

Whenever Dorothy accused him of being lazy, it hurt his feelings and his ego. Instead of talking about it to understand what the word lazy meant, Albert set out to prove to her that he was not lazy. In retrospect, Albert realized that he had fallen for a classic error of the ego.

Instead of speaking with his wife to understand her, he had swiftly moved to action to prove to her he was her rock and her security. This did nothing to address her concerns and worries.

With sadness, Albert reflected on how he had given up his thrown as the head of the household. He was so busy trying to make her happy that he was conceding tremendous grounds to his wife. The imbalance that resulted left the door open to a self-fulling prophecy. Men needed to be trained and domesticated. Through no fault of anyone else, Albert had slipped the rope around his neck and strangled himself at the alter of pleasing a woman.

This was never in his original plans. This was not how he had envisioned life. He was too eager and excited to show his wife his capabilities that he had waltzed himself right out of the kingdom. Now, he was just a helper boy assistant that was not getting any respect.

It started off very harmlessly simple. Dorothy insisted that the house was her playground for her to design as she pleased. Albert bit his lips in remorse for having gone along with the ridiculous idea. He was just as much a part of the home as she was. There was no reason to abdicate all the power over to her. Now he lived in a house that held no connection to him and his interest. Even the den he lived in was decorated by Dorothy.

It was the little things that mattered that were taken away first. On the reasoning that it was just a little thing. The video games were the first casualties to Dorothy’s makeover. The rationale was that it was imperative that Albert grow up and be a man. Next came the televised sports on the grounds that he needed to spend more time being a good dad.

The wardrobe was next. On the grounds that he should not embarrass his wife in public by looking so juvenile. These made logical sense. The arguments were well presented. Albert wanted to make his wife happy. So, he went along.

With bitterness welling up his throat, Albert was angry with himself for not paying closer attention. During the changes of his wardrobe, Dorothy was changing hers as well, but without his input or advice. In fact, he was forbidden to provide any input. Not in so many words, but the actions said it. Her closet was her domain. It was her individual expression. As a man, he should not get involved. Women had been oppressed enough by men and had their right to self determination taken away from them. If he loved her, he would not interfere with her self expression.

The end result, Dorothy had a very masculine work wardrobe that got the job done. The personal side of her wardrobe was all about maximum comfort and ease. The girlfriend look vanished. The soccer-mom look flourished. Any efforts on his part to add any items that would remotely please his eyes was swiftly and aggressively punished.

Albert soon realized that many of his memorabilias were annoying his wife. Because he had not thought far enough in the future and had not stopped his people pleasing ways, Albert removed all the offending items from the house. Dorothy seemed to be very pleased and happy with this. By the time Albert was done making his contributions, Dorothy felt like she was in a proper castle. She beamed with joy. She showed off her house to her friends. She even had it featured in a few magazines. She won an awarded for being such an excellent homemaker and career woman.

This was when Albert started to realize the errors of his ways. It was too late. The kingdom had been handed over and it was now a queendom. There was no going back. The cost of waging a successful assault to take back the castle would traumatize his children and cause undo harm to their marriage.

Albert knew he had to live with the consequences of his choices. It was time to man up and grow up. Dorothy had grown well ahead of him. She had cut off his lifeline of friendships. Albert was flying dead-stick solo in her castle.

The process of recovery was slow, long, and challenging. With Dorothy tightly controlling every aspect of life at home, Albert had to slowly and patiently grow his social capital. There was a lot of sacrifices made to achieve what he achieved. The first casualty was his career.

Dorothy was making more than enough money to run the home all by herself. There was no point in chasing the corner office anymore. So, Albert derailed his career to give himself time to study himself and grow as a person. The stronger he grew, the more he understood the consequences of his early errors.