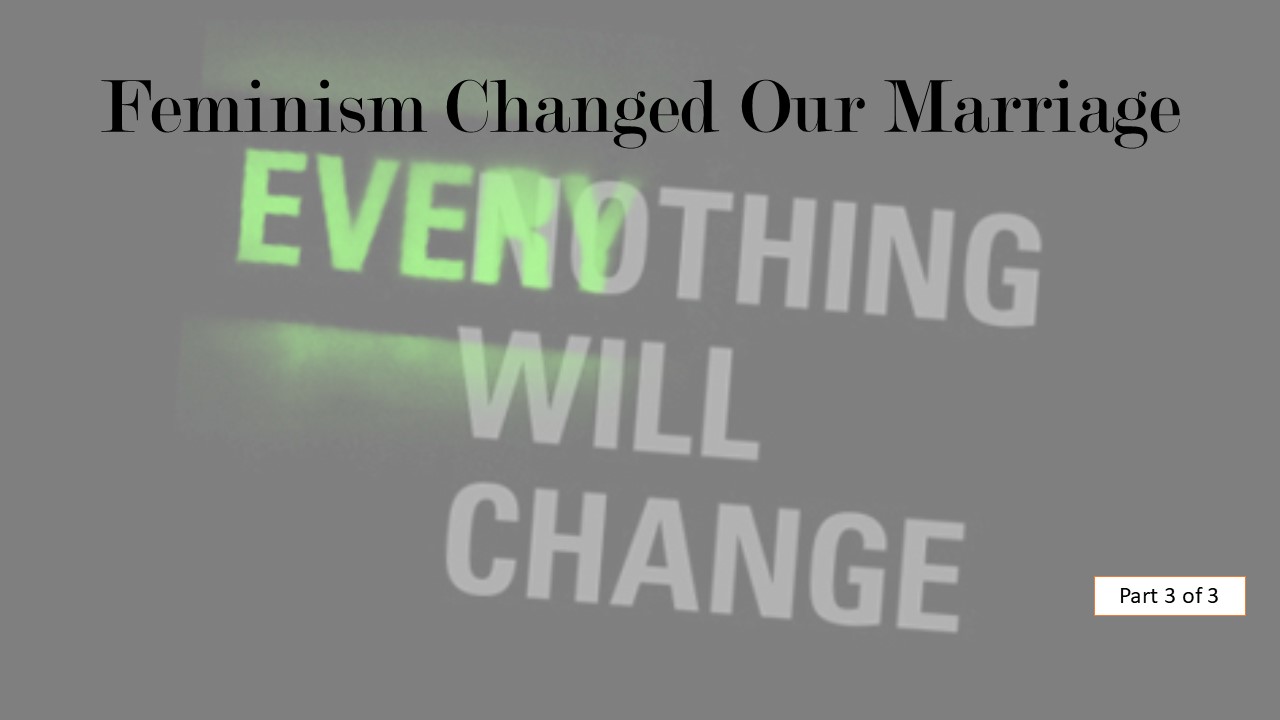 This is the final part of three… depicting a fictional story. Dorothy and Albert deal with a set of changes in their marriage. Could these changes improve or make things worse? Let’s find out. Two days ago, we started off with her side of the story. Yesterday, we touched his. Today, we’ll wrap up with the counselor’s side of the story. Enjoy.

It didn’t take long for the counselor to uncover the struggle hidden inside the relationship. Listening to them recount their lives showed two passionate people operating from two different sets of assumptions.

Albert was surprised to hear the angle of feminism being used to describe Dorothy’s concerns. It did explain a lot of the early struggles they had however. The issue was not feminism but the interpretation of the ideals.

Dorothy got married before she fully understood herself and what she wanted in life. During the process of discovery, she teamed up with a few women who were determined to lead their households instead of being led inside their household. This colored and shaped a lot of Dorothy’s views.

Albert, the people pleaser, never had access to the information Dorothy was contemplating. They had not talked about it. Albert gave more ground than was necessary because he falsely assumed that his generosity would be mirrored.

It’s the hidden contract fallacy that plagues a lot of ‘nice guys’. It’s the idea that if you do a ton of super nice things for a person, they will be so moved by this that they will automatically feel compelled to give you what you wanted spontaneously.

For starters, no one knows what someone else really wants. One can take educated guesses, but unless the person speaks up and expresses their desires, one really doesn’t know.

As Albert started realizing that his needs were not being addressed, instead of speaking up about them, he pushed them into a vault. Feeling undeserving, Albert worked harder to gain approval of his wife. Dorothy saw this as weakness in her husband and worked ever harder to fix this by taking charge and assuming leadership of the relationship. Her hopes was that he would see how leadership worked and would learn from it and step up to the plate. She never voiced this.

The compounding variable that made this all the more complicated, when Albert started asserting himself, Dorothy saw it as an effort to remove her voice and power. She fought back. Albert decided that the cost of fighting was not worth it to him and to protect his children, he silenced himself.

Because their overall vision for their family was close, Albert’s choice to silence himself was justified in that his children would not be at a loss for resources to grow. His calculations failed to account for the fact he was modeling the behavior of weakness for his children. They saw a father is a weak person and a mother is a strong person. The very concept Albert most feared had come true.

Dorothy feared not being heard. To ensure she was heard, she pushed her agenda forward relentlessly. Although she won on that front, she lost on another. Her husband vanished and her children learned to avoid expressing themselves to her with any dissenting ideas. Strength meant not listening to the feelings and needs of others. They kept their feelings to themselves instead of talking with mom.

With their lives growing in parallel fashion, the risk of divorce was very high. Albert and Dorothy needed to reacquaint themselves with each other. They had developed complex independent lives. They both had reached a point where they could easily separate and not miss a beat. This was not what they wanted.

The key to their success would reside in how well they got to know each other, as if they met for the first time. They would have to date each other, learn to speak with each other instead of at each other. They’d need to give up the convenience of electronic communication to have face to face real time communication. They had to stop depending on the technology and go back to the analogue way of connecting… heart to heart.

Dorothy had a particular hard time accepting her feminine side. To her, it was weakness. She loved her masculinity. She loved maneuvering through a man’s world and winning. Turning off the masculinity at the door to come home as feminine was a real challenge. She had forgotten how to be feminine. Her biggest struggle was embracing the strength that resides in being feminine.

Albert struggled with showing his masculinity at home. It conflicted with the assistant role he played. It was easy to hand off the choices to someone else. It avoided conflict. Albert had grown very good at blowing off steam privately. However, the family didn’t care too much for the shell of a man he was around the house. As Albert started to share his masculinity in the house, there was a lot of friction to surface. A new voice of authority was moving in. It ruffled feathers.

However, as time passed, the family realized that this new voice was not taking over. It was not bossing anyone around. It was caring, nurturing, and loving. The more they saw of Albert, the more the saw how deeply he cared for his family. The more his masculinity showed up, the more vulnerabilities of his they saw. The more they understood why he was who he was. The more they needed him to be Albert instead of an assistant dad.

With time, Dorothy started to embrace seeing Albert’s masculinity. It was not threatening. It was safe. It was secure. There was passion, ambition, care, love, and warmth. Dorothy learned that Albert really wanted the best for the family and she started to see the sacrifices he was making and willing to make to ensure his family was fine.

What surprised Dorothy the most, her femininity was not a liability. It fueled Albert to push harder to take care of his family. The more she embraced her femininity, the more open he became to her and more trusting he was of her. Dorothy started to realize that her masculinity was competition and threatening to her husband’s willingness to be vulnerable to her. By being more herself, he shared more of his heart with her.