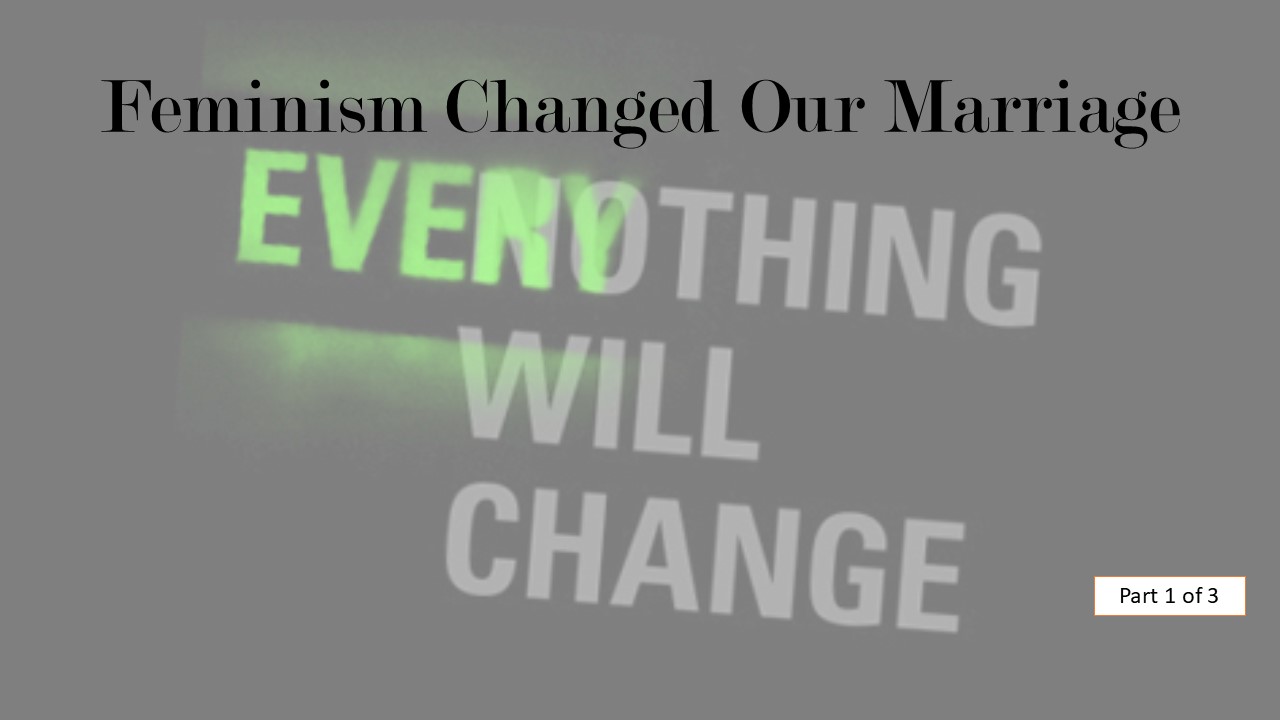 This made Dorothy dive into a little research about feminism to understand the real agenda. The more she read, the more she appreciated the efforts of women who wanted to have a fair chance to make an impact in the world. Humanity could indeed benefit from the voice of women. The fear that men had was ridiculous. A strong powerful woman was not a threat. She was an asset.

Armed with more knowledge, Dorothy worked all the more to improve herself, assert her will and ideas into her marriage. The results were speaking for themselves. Her husband was now carrying himself like a proper well groomed gentleman in society. There was no more worrying about what stupidity he would do in public for the sake of a good laugh.

Dorothy smiled whenever women asked how she had successfully trained her husband to be so good in society or so good with the children or so good at chivalry. Her go to answer was always… patience. It takes time to mold a man into the image that he needs to be. It takes time to chisel away the false ideals society imparts on men and reprogram him with virtuous ideals.

There were still moments of struggle the public didn’t know about. Those were usually fueled by her husband’s ego trying to resurrect itself. Those arguments were not fun to have, but were necessary. Dorothy made sure to always win those. Their lives were better off with her at the helm of their relationship. It was only a matter of time before his ego understood this.

To his credit, Dorothy was happy these arguments never occurred in public or in front of the children. This would have been unacceptable and would have had to be dealt with very swiftly and aggressively. Her husband had been well trained.

As Dorothy grew in confidence and abilities, her career soared. Rising through the ranks and into leadership gave her leverage and access to help other women climb the ladder. Grooming and selecting the right women for the job was a welcomed challenge. With an increasingly longer resume of proven track record performance, trust and faith in her leadership grew. This meant more hours at work and more hours on the road. It was worth it. Change was happening and she was a part of it.

During one of her usual spring cleaning pushes, Dorothy made an interesting observation. At first, it didn’t mean much to her other than her agenda had been working. However, the more she mused about her observation, the more concerned she grew. During the cleaning, she noticed that nearly everyone had too many things. They nearly all had stuff to get rid of and reorganize. All save one. Her husband had nearly no footprint in the house. Just the bare minimum to exist.

Ordinarily, Dorothy would have patted herself on the back for having helped her husband get rid of all his juvenile toys and trinkets. However, this was a level above. It nearly felt as if the man had wiped himself out of existence from the family. Besides his clothing and computer, there was very little else about the place that would indicate he lived there.

Puzzled, she confronted him about it one evening. Expecting a flurry of excuses and stories, Dorothy was ready to cut through the fluff and dive right in. His answer took her by surprise and knocked the wind out of her.

“You don’t need a man around here… so you don’t have one around here” the husband replied.

This made no sense. Why would he say something so ridiculous. Try as she might to get detailed information out of him, Dorothy was met with silence. The man moved about his to-do list as if Dorothy was not talking to him. There was no fight. No reaction. No emotions. No engagement.

“If you feel this way, why are you here then?” Dorothy snapped in exacerbated frustration.

“You need an assistant to run the house when you’re away. I’m just doing my job” he replied flatly.

Dorothy watched in horror as her husband walked away and resumed doing the work he had on his to-do list. There was no emotions. Just steady working away on the list.

Perplexed, Dorothy started to watch her husband very closely. Her observations confirmed his statement. He worked very diligently to keep to her list of things she needed him to do. His behavior reminded her of an employee who was content with collecting a paycheck. Get in, get the work done, get out. Polite, civil, at times jovial, but not engaged or invested.

Going over the financials of the house as well as their calendar showed the same pattern as well. Her husband was not engaged in the process of the home. His economic contribution was exactly what she asked for and not a penny more. He took nothing from the budget. Any personal expenses he needed addressed were handled by side income that was not part of the budget. His primary income was managed by her at her discretion. As if he was paying rent.

He kept a very tidy and clean calendar so she could reference his activities but he never brought things to her attention outside of the calendar entry. It was a simple existence that bordered on sterile. Had Dorothy’s life been this bland, she would have been stir crazy with cabin fever. When Dorothy asked him about his activities, he just shrugged his shoulders and moved on to the next task on his list. When she asked him of his dreams for the future, he stared past her and barely smiled before returning to his activities.

Pressing him, one day at the diner table, Dorothy insisted on knowing what his ambitions were in life.

“What am I missing here?” he asked in a frustrated tone… “am I not fulfilling my required duties well enough for you?”

“It’s not about my requirements, I just want to know where do you want to be in the future” Dorothy tried to calmly assure.

“I probably will be here working on your list of task” he answered in a way that shut the conversation down with a chill in the air.

He then got up, started clearing the table, did the dishes, and vanished into his den.

The realization that her wonderful marriage had gone up in smoke felt oddly cold to her. What had gone wrong? Dorothy could not put her finger on anything. Their life was wonderful. Things moved like clockwork. They vacationed together. They socialized together. They played games together as a family. They went to church together. What was wrong with her husband?

After some digging around, Dorothy started to uncover a secret life led by her husband. Somewhere along the way, his career had stalled without her knowing. As the children gained more independence, he filled his time with hobbies and interests. Dorothy knew about the hobbies but had no idea how serious he was taking them. She knew he was in a band but had no idea that they had a huge following and he had produces several records. She knew he drew art but had no idea he had a gallery and sold many pieces.

Dorothy became infuriated as she uncovered the extent of her husband’s private successes. There was no evidence of this in their home at all. No mention of his awards, no mention of his struggles and victories. This would need addressing fast. A mutiny under her watch was not going to work. Dorothy tightened the reigns and hardened her grip. This rebellious trait would be stamped out quickly before it ruined her perfect marriage.

Thank you for reading and enjoying part one in this trilogy. For those who shared this with others, massive huge thanks. Really appreciate the clicking of like too… as it signals to me that you’ve enjoyed the read.

Below, for those reading in the future, here are the links to navigate the chapters of this story.