Historically, in the not so distant past, guys had the luxury of societal and financial incentives line up in their favor. Women depended on men. So the guys often felt they could get away with treating a woman more like property than a partner. I don’t think that ever was right, even if the whole of society thought it to be perfectly normal. But that’s all I’m going to say on that.

The legacy of that history is… now men feel at times very frustrated. They want to express emotions, needs, and desires, but don’t have the practice of speaking their heart, let alone asking for assistance of their women. Worse, as women are bouncing back from the years of undue hard living, they are more about filling their dreams, their aspirations, their goals, and ambitions. They are now their own men and their own boss.

Not that there is anything wrong with that actually. They are after all their own thinking being. It is only appropriate they think independently and chase their own dreams… much like men have for ages. The trick is of course in the negotiation of joint living.

However, in a relationship, negotiating around needs that only the other can fulfill is trickier than ever. Timing is everything. Love in delivery of inquiry is far more critical than it has ever been. No more yelling and demanding. No more using physical intimidation (not that I have, but I’ve heard and seen… and it’s deplorable). The use of more civilized higher cognitive functions is of paramount importance nowadays.

The single hardest answer is “no” for many men. Having to remind myself that the “no” may be just for now and not indefinitely is a valuable lesson I’m still working on. And more importantly, learning to be cool with a “no” as permanent. That may fly in the face of anything primal one has built in, but it’s the reality today on the ground. Women need to trust that when they say no to a request… the man will honor it and keep it sacred. As she depends on his word for her sense of added security with him.

Not honoring her “no” makes her trust in him slip and erode. Why should she always be fulfilling your need and not know that she’s going to get her needs met? She’s not your personal emotional ATM. When she sets the parameters of her limits, she has the right to expect them to be respected. That’s exactly what a man expects when he sets up his parameters. It is a two way street. And today, for a change, women are holding men to that reality.

But, that doesn’t change the darker emotional spaces that exists when something dear and near to the desires of the heart gets turned down and won’t get met… and worse… friends, acquaintances, pals, another woman is more than happy to offer that fix. 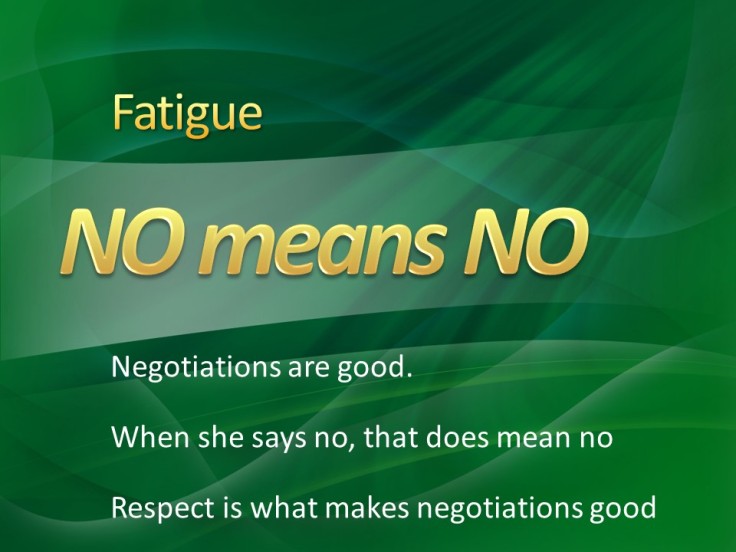