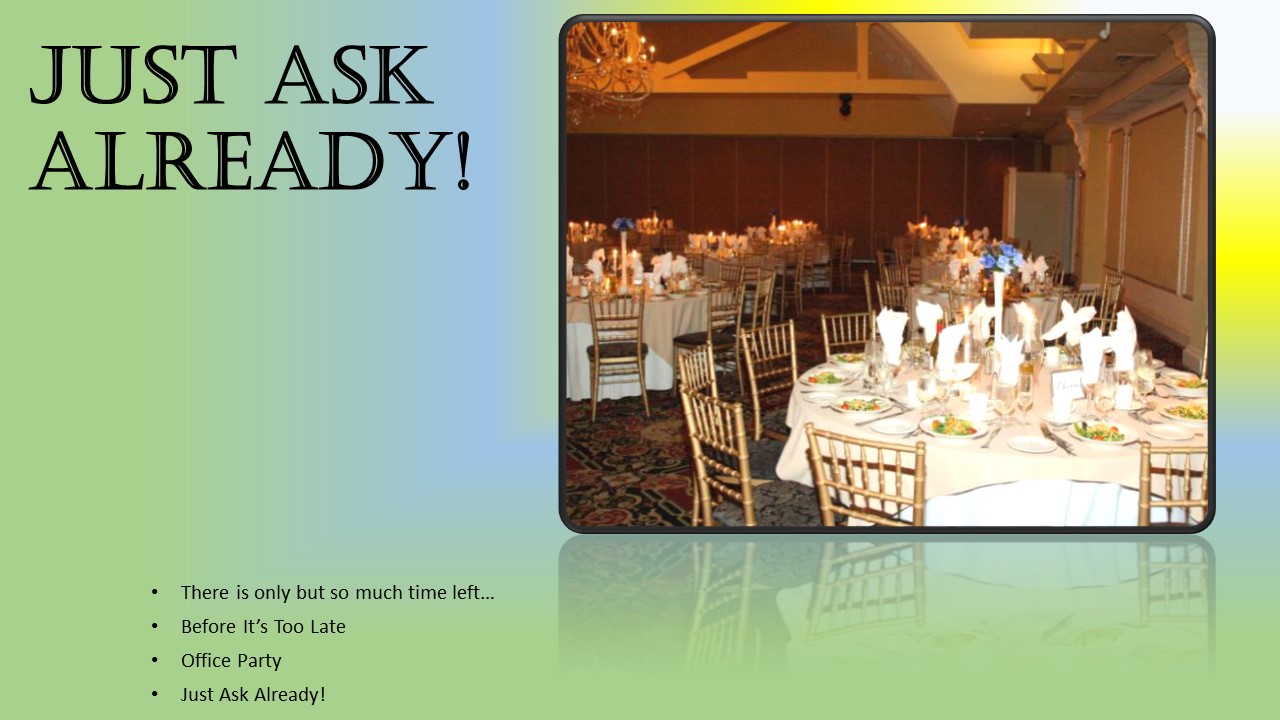 Then, as Connor’s eyes found hers again, something was different. Something had changed. Whatever he had looked at, flipped some switch. There was a degree of recognition that was deeply spiritual. He was looking at her soul in a way it had never been seen by any man. A degree of knowing and familiarity only reserved for passionately intimate lovers.

Sensing her face flush and blush, Betsy was so grateful the lights had dimmed a bit, as if the universe knew that something special was about to happen.

Connor leaned in further, nearly brushing his cheeks against hers and allowed himself a brief second to take in her perfume, the very mesmerizing aura that elevated his testosterone every single time.

“I would appreciate your kind consideration in gracing me honorably with a dance… after which, I’d like to impose a chat in a more quiet part of the venue” he softly said to Betsy, hoping like crazy that she’d say yes while fearing that she’d pull away and go about her business of dancing with Rex.

Rex. Who was watching like a wounded soldier seeing his dame being swept away by a civilian of lower social standing than a tax collector in ancient times.

Betsy tried hard to wait and hide the smile that was beaming out of her. She had waited long enough.

“The privilege is mine, finally”

This caught Connor unprepared. He felt yet another seismic shift, as if a new earth as being restored beneath him. Something just felt right and loaded with optimism. She was going to dance with him!

But, wait. Finally? What did she mean by finally??

Making a point to ignore his thoughts, Connor tried something deemed excessively risky and dangerous in his book. He reached forward timidly and touched her hand while slipping the other hand around her waist. To his great surprise, she took his hand and managed to close the gap between them in the most natural of fits one could imagine.

“Now you know”, she pronounced trying to hide her arousal and happiness.

Connor was feeling quite pleased. Now he finally knew that he had not lost his Betsy. OK, not his in the terms of ownership, but his in terms of hope for a relationship. The ownership concept made him smile and pull on Betsy drawing her completely into his figure. Connor noted with satisfaction that Betsy not only didn’t pull back or protest, but seemed to be encouraging him to keep moving forward.

The music shifted tracks and slowed even more as the lights dimmed even more. The mood was perfect. The tempo felt right. Their hearts were beating in unison and they both knew it. They were in lock steps in a wave of paradise.

Betsy hoped and secretly prayed that Connor would have the sense of dancing through not only the entire song, but into the next one… no matter the genre. She needed that therapeutic soul healing moment to continue as long as possible. The chat he had asked for might not go as well, given his romantic track record. This moment had to last so she had enough fill to handle any faux pas this man would make. She wanted them to have their best starting point

<Is it time to Conclude?>

Editorial Note: Adding a list of the chapters via a more modern approach. Just click on the image or title to read more of the chapters you’ve yet to read. Updated September 2018. After the list of chapters will eventually be a link to the portfolio table of contents. That particular page will eventually hold any new updates and chapters to this story… should there be more.

Your Portfolio Archive currently has no entries. You can start creating them on your dashboard.